This past Wednesday, our nation grieved the loss of Billy Graham. In an instant, I was hit with a wave of nostalgia, fondly remembering Billy’s last Indianapolis crusade. Nearly 200,000 Hoosiers heard the Gospel in just 4 evenings. Billy had an uncanny ability to remind the masses of their sins, while encouraging them toward repentance and thankfulness to the God who had redeemed them. His passion was palpable.

Beginning in 1997, my journey with the Billy Graham Crusade was unexpected. Because of Wheeler’s position in the Indianapolis faith community – and its unique ability to unite people across denominations, faiths, politics and social spectrums – I was approached to serve as Chairman of the Nominating Committee tasked to bring Billy to Indianapolis in 1999. My world grew as I served with diverse leaders in the faith community I otherwise wouldn’t have met. We were united by a mutual respect for Billy Graham and his ministry,

After my role on the nominating committee concluded, Ed Simcox – Chairman of the Indiana Billy Graham Crusade – asked me to continue as Secretary. The more we prepared, the more I respected Billy’s commitment to the Gospel and to uniting a diverse people from all walks of life. 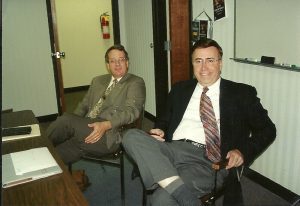 In the meetings I had with Billy, I was struck by his kind, sincere demeanor. A true gentleman, it was evident that the man you saw on camera was the man you met in person. His impassioned faith and unwavering commitment to his Savior carried him while he preached to thousands and also while he spoke in private conversation.

What It’s All About

The crusade in Indy was remarkable. Each night, I was honored to pray with Billy before he preached. It’s extraordinary to recall the thousands of attendees that came forward out of their seats after trusting Christ. Eighteen months of planning and work, and I remember thinking, “This is what it was all about.” How humbling to have played a part. I’ll never forget standing with Dan Coats – now our Director of National Intelligence – just before he was to give his testimony that last evening. Dan turned to me in tears, sincerely moved and struck by what was happening in that arena. Billy’s message ministered to even our nation’s most revered individuals.

My service on the crusade committee is, indeed, one of the highlights of my career. What a privilege to labor with Billy Graham – a humble servant, lover of the Gospel and bold follower of Jesus.