Same Kind of Different As Me

23 Oct Same Kind of Different As Me 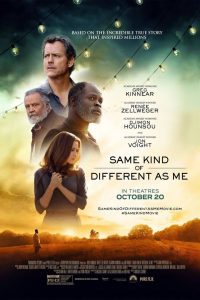 “With more money than they could ever possibly need, Ron and Debbie Hall have everything they could ever want … except for a loving marriage. When Ron’s unfaithfulness is brought to light, Debbie invites him to stay—as long as he remains truthful and does what she asks of him. But when her request includes serving the homeless at an inner-city rescue mission, Ron would prefer to write a large check instead.

Guided by her faith and spurred on by the dream of a homeless man she senses will change their city, Debbie befriends a disenfranchised man named Denver. More surprisingly, so does Ron. Despite vast differences, their lives begin to intersect and they all are changed … forever.”

Check it out at http://www.samekindofdifferentasmemovie.com/.